As parents to a 3 year-old and a 9 year-old with additional needs, we’re always searching for that elusive family option which suits everyone. As our weekends are precious, we don’t want the day to be wasted or to degenerate into a fight as one daughter decides she’s bored with the options the other one has found interesting, and this is especially challenging given the age difference and our eldest’s ASD.

We have a few regular places we spend time in but we were delighted to pay a first visit to Southampton’s Injoy as part of a special bloggers complimentary event – and we were so surprised by just how much was on offer under one roof. Handily and centrally located in Ocean Village, the building used to be a cinema so my husband spent a little while reminiscing about nights out he’d spent there with his friends as a teenager!

There are tons of things to take part in, all of which can be booked separately or as part of party options including soft play, laser tag, climbing, trampolines and art / cooking class.

Both girls started in the fab soft play which is also full of interactive features and extra bits including brilliant little cars to drive. They loved the lights and features built into the floor, especially the screens displaying fish and so on – occasionally a (non-frightening shark) would appear!

Then it was off to the excellent trampoline park and ninja course for our oldest and she had an absolute ball burning off some energy and getting some ‘me’ time. The youngest wanted to spend more time in the soft play and it was so easy to accommodate both girls before we came back together for lunch.

We were particularly impressed by the food, especially the pizza which is cooked in a pizza oven downstairs which has its own little section for the cooking classes. You can order it any time as part of the extensive food offering and we tucked into a really top plain pizza (the youngest’s favourite, and she wolfed 5 slices), big chunky burgers and skinny chips. There was also a great range of cakes and sweet treats and the quality of everything was outstanding.

After lunch and a little rest for tummies to digest their contents a bit, youngest daughter demanded to return to the soft play so the oldest and I headed off to the climbing wall section which also has a drop slide (where you get in a red boiler suit and are pulley-ed up a very very steep ramp before being released!), a giant soft step staircase and leap of faith where you launch yourself towards out of mid-air into a suspended cylindrical punch bag.

With some encouragement, our anxious child grew slowly in confidence over her session and I was so chuffed to see her make her way up and down the walls, regardless of how high she could go. She felt very safe in the harness which meant that any time she had had enough, she could just push back from the wall and float down to the floor again. The excellent staff were on hand at all times to assist. 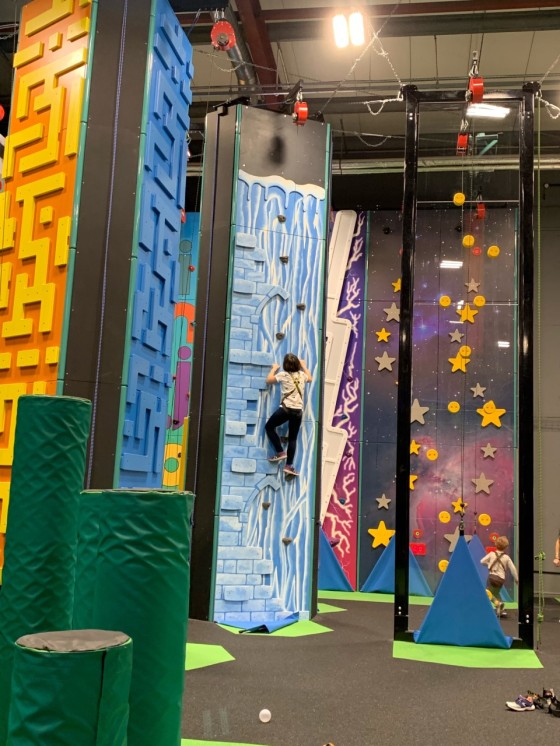 And just when we thought we couldn’t be any more impressed, we paid a visit to the Interactive Room. We had hoped that this would be a real treat for our daughter with Aspergers and it turned out to be the case – it was just so fun on so many levels.

For starters, there was some sand to muck around with (she loves tactile stuff) and a giant central playboard on which you could chase aliens and jump on them with your feet to score points.

Then every full wall of the space offered something else enticing to do. Why not grab a giant pencil to ‘draw’ and change the colours of the picture, or throw a soft ball and try and hit invading aliens?! 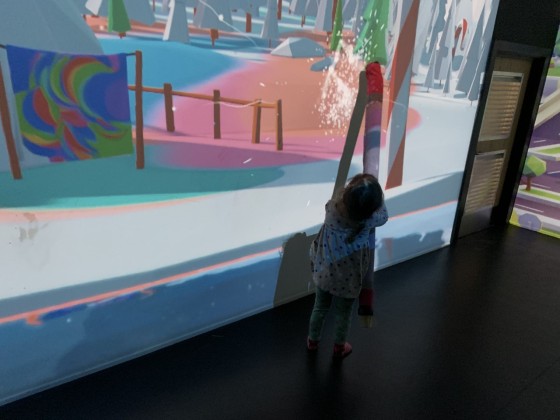 A particular hit was the cityscape which offered you the opportunity to colour and design your own building or plane, and then quickly scan it and add it to the wall where it would appear before your very eyes!

As we left – after hours of genuine fun and family time – our eldest remarked: “I had a really fun day”. She rarely expresses positive sentiments in this way so this was most certainly a glowing five-review for Injoy. We shall be back!

When the sun comes out, so does lighter fare. In addition to my good old weekday stalwart the pastry sheet veg tart (which I have blogged about previously), I also rely on a homemade pizza to provide a healthy and tasty family meal.

As I quite often have to cook from a sitting position these days, thanks to my duff back, I definitely don’t go to the trouble of making a dough from scratch. Instead, I pick up a few packets of those brilliant pizza dough mixes from the supermarket. You add a bit of water, do a little light kneading and leave it in a warm place for ten minutes. And you still feel like you’ve done something a bit more than the norm.

The best thing about this concoction is that you can use quite a number of items which might be hanging around your fridge or cupboards – pizza is a friend to many ingredients. You don’t even have to have a tomato base – nice options include a barbecue chicken version with red onions and some red peppers.

I am also keen on this particular recipe as it’s another way to talk to our chocoholic daughter about vegetables. Sad as that sounds, we are constantly worried about her limited diet (which she prefers despite having been weaned on purees of every fruit and veg under the sun). When we make a pizza, she likes to get up on a chair and place the ingredients on top of the base. She might lick the odd one, but hey, the only people who are going to eat it are herself and her parents.

Our pizza this week, strangely shaped as it was, hosted red and yellow peppers, mushrooms, some chorizo and mozzarella on top of a base of tomato puree with a sprinkling of oregano. We added some basil from the windowsill. 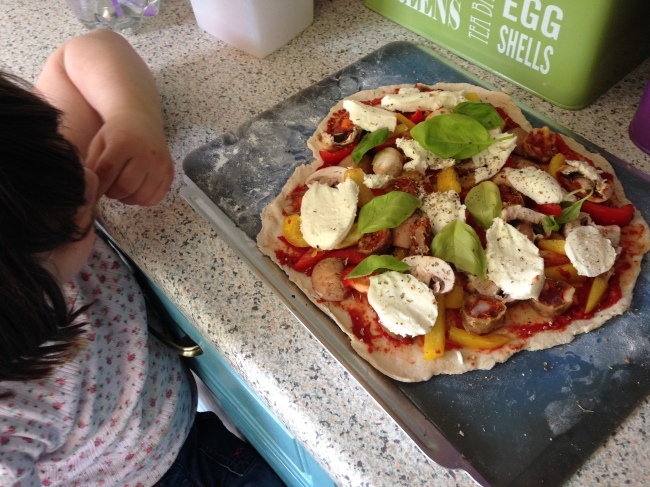 It doesn’t ever go far wrong – how could it, especially when cheese is involved! And the good thing is, when she’s been involved with preparing it, she’s usually a bit more happy to sample it.